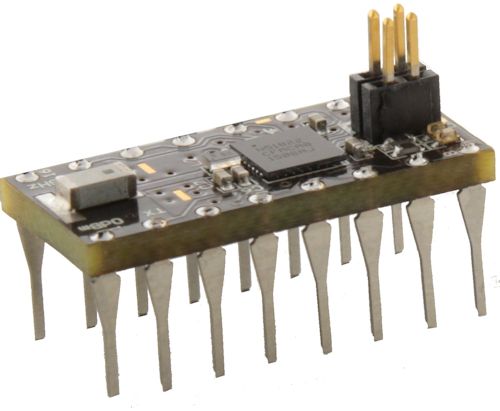 For programming and debugging of OSHChips, a standard SWD cable connects the programmer/debugger to the connector on the top of the OSHChip.

The cable is a 10 wire ribbon cable, with a 0.050” pitch 2 by 5 pin female keyed IDC connector at each end. The cable is typically 4 to 6 inches long and has a red stripe on the wire that carries the signal between pin 1 of each connector.

If you already have an SWD programmer from another vendor, provided you also have a programming cable with the 0.050” pitch 2 by 5 IDC connector on the end, you can get by without the adapter. See below for details.

Looking at the connector from above, with the alignment key on the left side, the pins are numbered:

ARM documents both old and new programming/debugging connectors in this documnet cortex_debug_connectors.pdf  .  The OSHChip_CMSIS_DAP V1.0 Programmer/Debugger connector is shown on the top of the second page of that document, with the only signals implemented being pins 1 through 4. Here is the diagram from the ARM document:

The OSHChip_CMSIS_DAP V1.0 Programmer/Debugger is powered by the USB cable, and has an internal regulator for 3.3V .

If OSHChip is powered at 3.3V

SWD Programmer/Debuggers from other suppliers

The following have not been tested, but may work using the Keil IDE

If you do not already have a programmer, when ordering OSHChips you should also order an OSHChip_CMSIS_DAP V1.0 It comes with a programming cable and an adapter that converts from the 2 by 5 pin IDC connector on the end of the cable to a 2 by 2 conector that mates with the connector on the top of OSHChip.

To connect the SWD programmer to OSHChip without the adapter, the IDC connector must be carefully positioned so that the 4 pins on the top of OSHChip fit into the 2 by 2 pins at the red stripe end of the connector at the end of the cable. The cable orientation is the same as that used when the adapter is available. When attaching the cable to OSHChip, just be very careful that the 4 pins from OSHChip go into the 4 holes in the connector that are closest to the red stripe on the cable.

See the picture below.